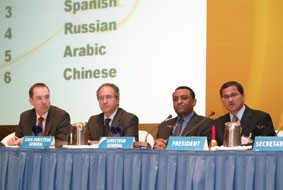 A new international treaty on trademarks, known as the “Singapore Treaty on the Law of Trademarks”, in recognition of the country that hosted the final round of negotiations, was adopted on March 28, 2006 by member states of the World Intellectual Property Organization (WIPO). The revised treaty will benefit national and regional trademark administration authorities in terms of simplified and streamlined procedures. Brand owners can also look forward to lower transaction costs in trademark applications.

Deputy Prime Minister and Minister for Law Professor S. Jayakumar said, “I congratulate WIPO and all delegates on the successful conclusion of the Diplomatic Conference and the adoption of the revised Trademark Law Treaty. We are pleased that WIPO member states have agreed for the treaty to be named after Singapore. Singapore is honoured to play its part in facilitating international consensus on a key area of intellectual property, as our contribution to the development of the international IP framework.”

The Conference saw almost 400 top IP policy makers and government experts, representing the majority of 183 WIPO member states, actively participating in the two and a half weeks of intensive negotiations held at the Suntec Singapore International Convention and Exhibition Centre.

Ambassador Burhan said, “I was impressed by the level of commitment shown by member states of WIPO to ensure a successful conclusion to the negotiations. The delegates worked hard, oftentimes meeting into the night, to ensure we had an outcome that was satisfactory to all parties. I believe this was because every delegate in the Conference recognized the importance of the treaty; it will boost international trade and deliver an enhanced and harmonized trademark procedure that will benefit nations, brands and businesses. The consultations and discussions reflected the constructive spirit of cooperation and compromise among WIPO members.”

The spirit of goodwill and mutual understanding that prevailed among the delegates resulted in the adoption of the Singapore Treaty earlier than scheduled. The Conference which was slated for 13 to 31 March 2006, ended three days earlier on 28 March 2006.

The concluded Singapore treaty covers various aspects of trade mark registration and maintenance, including electronic filing of trade mark applications and associated communications, registration formalities on the representation of both visual and non-visual trade marks, the recording of trade mark licences, relief measures when certain time limits have been missed, and the establishment of an Assembly.

At the closing of the Conference, WIPO Director General Dr. Kamil Idris expressed his gratitude to the Singapore Government when he said, “Through meticulous preparations and the provision of impeccable Conference facilities, the host Government permitted the meetings and discussions to run smoothly and seamlessly. I am sure that I speak not only for the Organization but for its entire membership as well as all participants in the Conference when I say how indebted we are to the generosity, hospitality and friendship of the Government and people of Singapore.”